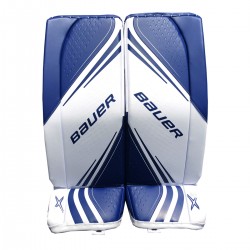 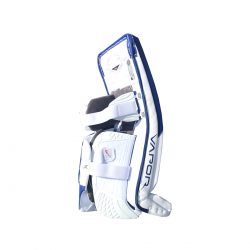 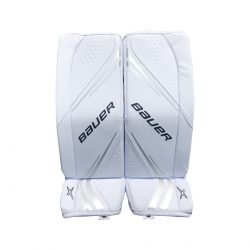 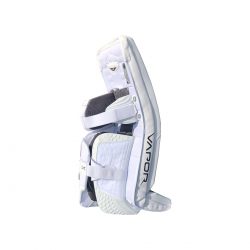 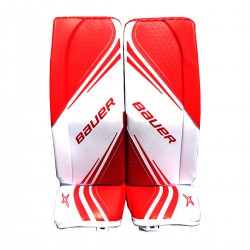 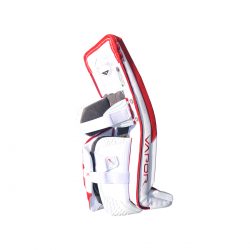 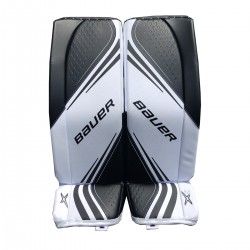 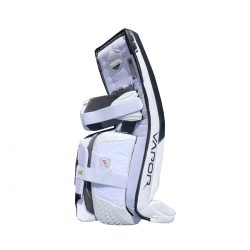 The new Bauer Vapor 2X Pro Senior Goalie Leg Pads is made for a dynamic-style goaltender who is lightning quick. The 2X goalie pad incorporates the  C.O.R.T.E.C.H. in the calf and knee plate areas which are the portions of the pad that get the most wear and tear. Bauer also incorporated features into the Vapor 2X Goalie Pads like the DYNAMIC FLEX core with a CURV composite thigh rise which keeps the pads pre-curve without it becoming too soft and floppy over time. The FREE-FLEX 100 degree boot is a softer feeling boot which almost every goalie prefers because it makes recovery transitions much easier then a stiff boot. Also in the boot area is a new elastic boot channel that allows for more flexibility in recovery positions along with helping rotate the pad back into position during the recovery process.  Also new for 2019 is the offset Monster toe attachment which is a bungee toe string system with a quick that is easy and quick to fasten.

The Bauer 2X goalie pad is considered the hybrid style pad in the Bauer line vs. the Supreme line which is their blocking/butterfly style pad.  The Vapor pad is softer and has more pre-mold curve compared to the Bauer Supreme goalie pads.  At Goalies Plus, I will be the first to say that I am very impressed with the new Vapor 2X line.  I have been critical of both first generation Bauer Vapor and Supreme goalie lines, mostly because of durability issues.  Starting with the Supreme 2s and Supreme S29 series which started in 2018, we have seen a huge increase in quality control at Bauer with very minimal and minor warranty issues.  At Goalies Plus, I can honestly say that all of our goalies that tried the 2017 Vapor 1X pads really liked the way the pads played.  The pads had enough flex to be worn by a hybrid goalie pad but enough strength and rigidity to perform the butterfly and butterfly slides fast and easily.  However with the 2017 Vapor model, there was the issue of durability and it was hard to put that out to our customers spending top dollar, we knew the pad would perform very well but there was a risk of the pad coming apart. The 2018 Supreme line showed us that there were no longer the durability issues of the past and therefore we could go big this year with Bauer and the Vapor 2X line.  It is easy to see why NHL goalies like 2018/19 NHL Vezina finalist Andrei Vasilevskiy choose to wear the Bauer Vapor 2X line, as the pads play to his strengths of super athletic style of goaltending.