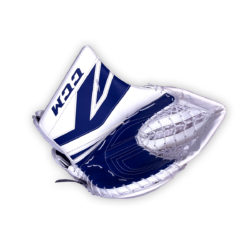 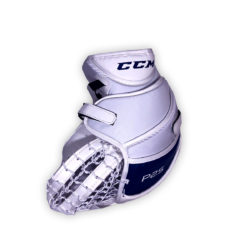 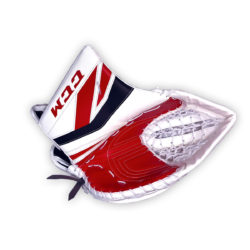 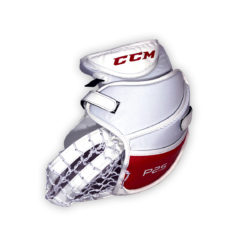 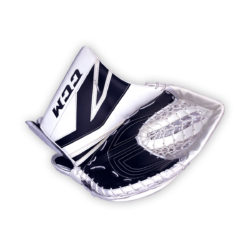 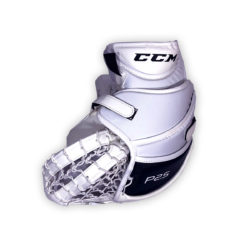 For 2018, CCM has decided to add some new features to the ultra popular Premier goalie catch glove.  Starting with the traditional features, the CCM Premier P2.5 glove keeps its traditional 60 degree break.  This break goes back the mid 2000’s starting with Koho 590 model, then transitioning to the RBK Premiers, then on to the Reebok Premiers and now into the CCM Premiers.  This P2.5 still uses the one piece cuff that has been used for the past four generations of Premier gloves.  The one piece cuff maximizes the surface area of the glove and is perfect for the blocking style or butterfly style goalie.  As for the changes to the new Premier P2.5 glove, the most obvious and visual is the change to a double t pocket with a u shape design at the base.  The double t pocket creates a softer feel then the traditional singe t pocket of the previous generations.  The u shape base of the double t allows the glove to break in much easier then in the past. The inside of the new Premier glove is almost identical as the past generations with one exception.  CCM added a Velcro strap across the back of the hand that allows the glove to be worn tighter then in the past.  The CCM Premier P2.5 comes standard with a game ready palm construction.

CCM has two lines of goalie gear, the E-Flex II and the Premier series. Each line is made for a particular style goalie. The E-Flex line is built for the hybrid style goalie who prefers to use many different save techniques and also likes to have more mobility while playing. The E-Flex glove is built with a deep thumb angle which helps direct the puck into the pocket. This glove also uses a 600 break angle which is a break that comes straight through the middle of the hand. The CCM Premier series is built for the coverage style goalie who plays big and likes to use the butterfly technique as their preferred save technique. This goalie is always trying to maximize space and size and their goalie gear. The Premier goalie glove has a shallow thumb angle which creates more surface area. The Premier glove also uses a 590 break angle which is a break that is closer to the goalies fingers. Both gloves use a one piece cuff construction and both gloves use the same materials.

Many parents do not understand the sizing terms used in goalie equipment. Youth, junior and intermediate are often confused as too which term goes with which age group. We will explain the differences to help eliminate any errors in the ordering process. Youth goalie gear is the smallest on the market. This is generally for your five year to eight year old goalies. Youth gear is generally less expensive and not made with high quality materials. Higher quality materials and foams at a youth level pose two issues. One; they are too stiff for a small goalie to move around and two; the goalie will outgrow the gear before they even break it in. Therefore it is ok to have lesser quality at the youth goalie gear age group. The junior goalie equipment is for the eight year to the twelve year old goalie. This again is not made with the highest quality materials. The quality is certainly better then the youth goalie gear however the need for flexibility and movement outweighs the need for high end materials that will last several years. In the junior level gear, specs are more defined and equipment is made with performance in mind. Generally junior goalie equipment will have a lot of performance features that will be found in higher level gear. Lastly is the intermediate level goalie equipment. Intermediate gear is generally for eleven to fourteen year old goalies or even smaller adults. This gear generally uses higher density foams and higher quality materials. Goalies in this age group put a lot of wear and tear on their gear so manufactures need to build it accordingly. Everything about intermediate gear is made with higher level performance features and extra protection features. Players at this age group are playing faster and shooting harder therefore the goalie gear needs to be better as well.