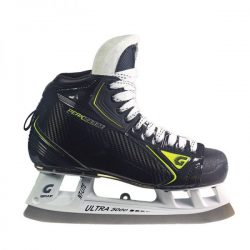 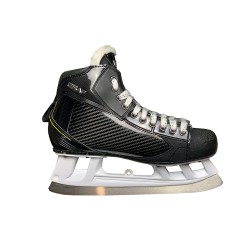 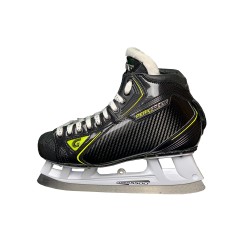 New for 2020 is the new Graf Pro G Goalie Skates.  The Graf Pro G is a cowlingless goalie skate that is extremely light weight with a carbon fiber quarter package design.  Graf has always been extremely successful in the goalie skate category with goaltenders such as Carey Price and Braden Holtby wearing Graf skates in the past.  As the goalie skate had evolved from having a plastic cowling over the boot to skates without a cowling, the older Graf goalies skates started to become obsolete.  Graf had also fallen on hard times after the original owner of Graf Canada – Mile Hill had retired several years ago.  It had gotten to the point that Graf had gone into bankruptcy, at which point Mike Vaughn stepped up and took over ownership of Graf.  Mike Vaughn decided to bring Graf back to its grass roots fit and started the project of rebuilding the brand.  Mike wanted to move slowly and build these skates in the best possible technology, therefore two years went into designing the Pro G cowlingless goalie skates.

People new to Graf may not understand the Graf fit compared to other skates.  Graf is very unique because they have a true heel pocket and therefore you do not have the issue with the Bauer bump in the heel area.  Graf uses a two piece last on the Pro G skate (last is the material that wraps around the back of the skate).  Many manufactures use a one piece last that wraps continuously around the back of the skate.  Since it is one piece, the only way to create a heel pocket is to do it with foams and not the actual shape of the last.  Although this may work with some players, other players will get irritation in this area which leads to calcium deposits and therefore create a bump on the back of the heel – commonly known as the Bauer bump.  Graf uses a two piece last design which is sewn together at the back of the heel.  By using a two piece last, Graf is able to create a real heel pocket which allows the heel to sit in the skate more naturally and create a better heel lock.  This ultimately adds to increased comfort and increased performance.

Also new on the Graf Pro G goalie skates is a unique rocker contour on the skate blade.  For years, goalie skates have come with a flat blade design which makes c-cuts and quick foot pivets very difficult.  We would say it feels like you have ski’s on the ice which makes quick movements almost impossible.  The Graf rocker design allows for quick piveting movements along with putting the goalie on the balls of their feet while in their ready position/stance.  Putting the goalie on the balls of their feet versus their heels and allows for much more explosive movement into save techniques.  Another huge advantage of this rocker is while be down in the butterfly position.  A goalie can use the attack angle of the cowlingless boot along with the rocker of the blade to easily grip the ice and effortlessly move side to side without getting out of the butterfly position.

Another unique design feature is the piece of steel coming up through the middle of the holder.  Graf felt that a puck could squeeze through that opening and designed the holder and steel to have this piece to eliminate any puck from going through this opening.  The Graf Pro G goalie skate also has a Lundqvist loop on the back of the heel for the goalie that wants to put their goalie pad boot strap around the back of the heel versus under the heel.

All in all, we feel that this skate is basically an off the shelve custom goalie skate.  We would even go as far to say that the quality, performance, weight and durability far surpass the most popular custom goalie skates in the market today that cost twice as much as the Graf Pro G.