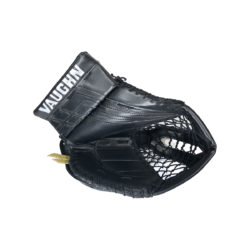 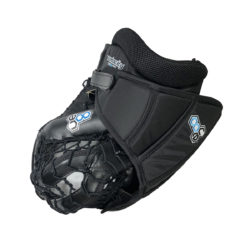 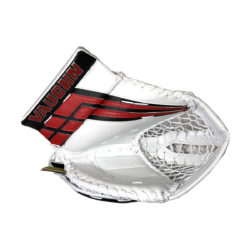 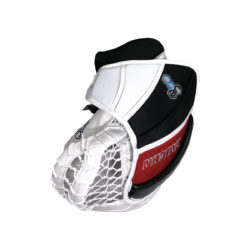 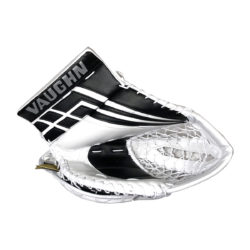 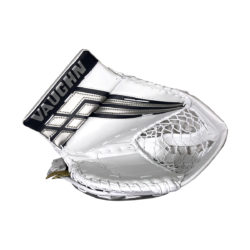 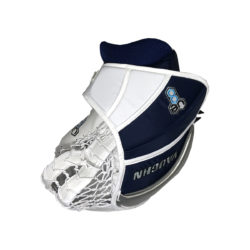 New for 2018 is the Vaughn Velocity VE8 Pro Catch Glove.  With a new design and traditional Vaughn feel, the VE8 is one of the best new gloves for 2018.  The new design of the VE8 Pro glove keeps the traditional 60 degree break but incorporates new features that allows the glove to be more flexible compared to past generations of Velocity gloves.  The Velocity VE8 Pro has a two piece cuff design that allows the goalie maximum wrist flexibility.  This is a popular feature among goalies who stick handle with the pocket of the glove in a downward position.  In this downward position the goalie needs a good bit of wrist movement to be able to properly play the puck.  Another new feature is the split T design of the pocket.  At the base of the pocket there is a single t that splits into a double t the higher it goes in the pocket.  The single t at the base gives the glove much more flexibility then a traditional double t base.  As the pocket transitions into a double t, the glove then takes on the soft open characteristic of a double t pocket.  This is popular as it creates a soft catching pocket which is much more forgiving then the single t pocket.  This t pocket design also allows the glove to open and close fully which give the goalie the blocking surface area and the max closure of the glove. Based on what we have seen, the VE8 Pro glove is much closer to what actual NHL goalies use when it comes to Vaughn gloves.  In the past, most NHL goalies used models such as the 5500 that felt one way while the retail version of Velocity gloves felt entirely different.  We feel that this glove is as close the what the pros are using then ever before.