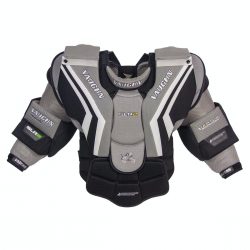 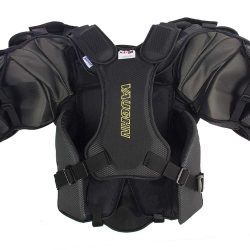 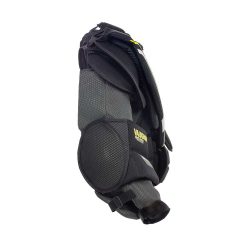 Vaughn chest protectors account for 50% of all chest protectors worn in the NHL. One of the most popular choices in the NHL is the Vaughn Ventus SLR2 Pro Carbon Chest & Arm Protector. The Ventus SLR2 Chest Protector is the continuation of the Vaughn Epic Chest Protector series.  The Epic was one of the most popular chest protectors Vaughn had ever made and the SLR2 Ventus Chest Protector is the modern version of that series.  The Vaughn Ventus SLR2 Pro Carbon Senior Chest Protector series is built for the coverage style or butterfly style goalie that likes the shoulders to be a little larger. The SLR2 Pro Carbon chest protector was built with large, squared shoulder floaters that maximize shoulder width in the net.  Although the shoulders are larger, the arms still have a great range of motion compared to other coverage style chest protectors.  Vaughn also added a second layer of protection built underneath the shoulder floaters, this second layer is velcro’d in and can easily be taken out or put back in.  Some goalies love to have this added layer in practice for additional protection and take it out in games for added flexibility.  For 2019 Vaughn has added a strap at the top of the shoulder floaters that can be snapped and unsnapped. The reason for this is for goalies who wear suspenders.  Traditionally goalies have fought to find a place to put their suspenders, often times the suspenders would slide down over the goalies shoulder and interfere with the goalies arms.  By having these straps, the suspenders are locked into the proper position and cannot fall down over the goalies arms.

There are two basic designs in the goalie market in regards to chest protectors. These are based on the two types of styles that goalies play – hybrid and coverage. The hybrid goalie needs a more athletic style chest protector that allows him/her to move freely and maximize their agility. These units contour around the body with little to no gaps. The shoulder floaters are also smaller and form around the goalie in a more natural manner. Arms and elbow guards move freely and do not bind up, allowing for maximum mobility. The big upside to having an athletic style chest protector is the movement and freedom these provide. The downside to the athletic style chest is a decrease in size and materials. Now we are not saying they are not protective because most chest protectors are built to a very high standard and are have great protection qualities. However to make something move better you have to take something away and by doing this there will obviously be less material. We can say honestly that athletic chest protectors are extremely protective and the added materials in the blocking style are more about taking up space then adding protection.