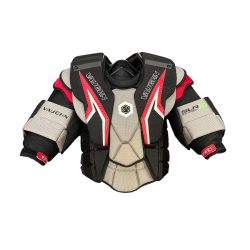 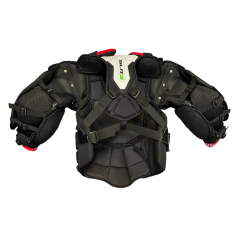 New for 2022, Vaughn has added adjustable length arms on the Ventus SLR3 Pro Carbon Chest and Arm Protector.  This will only be available only on the Pro Carbon version and not the Pro version.  The SLR3 Chest & Arm protector also uses higher density foams with carbon reinforcement for better coverage and better overall protection.  The arms (forearm and bicep) have added reinforcement compared to previous generations of the SLR’s.  The forearm and bicep area will also have additional wrap around protection that has not been available on Vaughn chest & arm protectors in the past.  The sternum area now uses the Pure Composite foam that Vaughn started using in the Velocity V9 series.  The Pure Composite foam is a composite injected foam that is incredibly light and extremely protective,  Also new for 2022 is a new dual strap system in the back area which allows for greater customization for every individual goalie fitting needs.